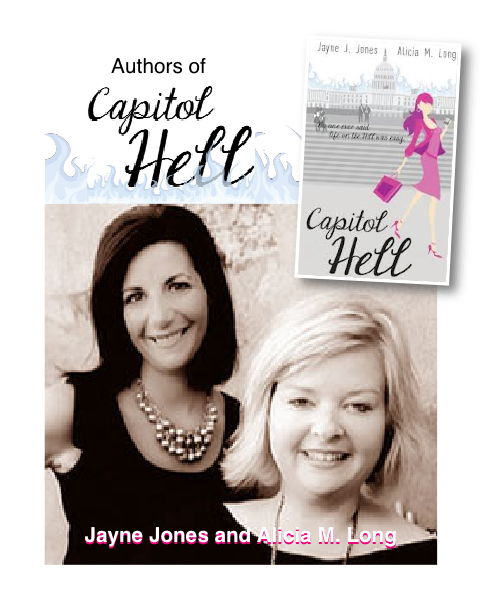 ‘Capitol Hell’ tells the story of Allison Amundson, a small town girl who lands the highly sought after job of scheduler to the newly-elected and rising star of the US Senate, Senator Anders McDermott III. While she thinks she is on the fast track to success, she quickly learns that life on Capitol Hill is even more dysfunctional than portrayed on TV. In fact, it is Capitol Hell.

Jayne Jones and Alicia Long, two Congressional Staffers turned authors, are excited to share their expert knowledge about working on Capitol Hill, in politics, and on campaigns. Former US Senate staffers, Jayne and Alicia have written the brilliant new behind-the- scenes political novel, ‘Capitol Hell’. This new page-turner will make you laugh out loud.

As the 113th US Congress convenes, partisan gridlock is the least of their worries. Jayne and Alicia are ready to share insights that no one else has been willing to tell before – what life is like behind the Senate office curtain!

I caught up with Alicia during their manic promotional tour to get some insights into who they are, how they got into politics and what they plan to do next.

Q: Hi Alicia, thanks for taking time out of your crazy schedule to do this interview with me. Can you first give my readers an idea of your respective backgrounds and what first got you into the political arena?

Alicia: I have always been interested in politics. I remember sitting around the dinner table and having discussions about politics and what was going on in the world from a very young age. When I was in college at the University of Minnesota, I had this great political science professor who really nurtured my passion for politics. I decided to join Senator Coleman’s Senate campaign back in 2002, he won, and the rest is history!

Q: Can you remember the first incident that happened that made you think of writing ‘Capitol Hell’?

Alicia: Oh there are too many to count! From being asked to change the Senator’s laundry to seeing staffers walk Senators’ dogs around the Capitol complex, I soon realized that nothing was beyond the realm of possibility on the Hill. Congressman who only attends dinners where fruit platters are served for dinner because he is on a special diet. Sure. Senator throws her blackberry across the White House lawn because she was upset about an email. Of course. Staffer gets fired for drinking, driving, and crashing the Congressman’s car. Why not! There is all kinds of crazy that we witnessed on the Hill, so we decided we just had to write about it!!

Q: What made you write ‘Capitol Hell’ as a novel rather than an exposé?

Alicia: Exposés tend to come off as negative and also tend to be written by people who are disgruntled or have an axe to grind. Neither Jayne nor I fall into that category. Life on the Hill can be tough, don’t get me wrong. And, there are a lot of crazy things that you’ll witness. But, at the end of the day, we both really enjoyed our experiences and wouldn’t trade them for the world. We wanted to write something that would give our readers a glimpse into what life on the Hill is really like, but we wanted to keep it light- hearted and funny at the same time, and I think we accomplished that.

Q: The characters are obviously fictional (wink wink), but could some politicians recognise themselves within its pages?

Alicia: I like to say, if you see a negative attribute in the book, and you happen to think it’s you, then maybe it’s time for you to do a little introspection. We did base a lot of the stories on things we saw or did or were told about. But, the book is not meant to be based on anyone. I will say that some politicians do happen to provide us with a little more fodder than others though!

Q: Both of you have many other interests and responsibilities including teaching, working full time, being acting committee members, your work with charity – how do you find time to write?

Alicia: Writing ‘Capitol Hell’ was a long process. All told, it took us four years. We both are very busy, but I think we both feel that writing this book and these stories was cathartic in a lot of ways. Don’t get me wrong, the editing process is taxing. But, writing the book itself is really a lot of fun. And, it definitely helps to have your best friend writing it with you because we are able to push each other along! We just hope the next one doesn’t take us quite as long to write!

Q: Aha, so there is a sequel? Or are you working on another book altogether?

Alicia: Given all of the positive feedback we have gotten about Capitol Hell and considering the clamoring we hear for a sequel, Jayne and I have definitely started tossing out ideas for Capitol Hell Revisited…although we need to come up with a better title than that. I think we’ve both added writing the rest of the story for Allison and Janet to our lists of New Years Resolutions!

Q: What future goals do you have together and/or separately?

Alicia: I think Jayne and I would both love to continue to write. It provides a nice respite to our hectic lives, and people seem to enjoy reading our stories, so I think we definitely want to continue to develop that craft! Otherwise, I plan to continue to work in DC as an attorney and would like to eventually return to the prosecutor’s table. And who knows, maybe a foray back into politics could be in the cards for both of us down the road. 🙂

Q: So, is writing more enjoyable than politics?

Alicia: I would say that asking that question is like asking someone to compare apples and oranges. Writing is more like apples, healthy, good for you, cathartic, one a day keeps the doctor away, etc. Politics is more like oranges, zesty, tangy, and if you eat too many you can end up with canker sores in your mouth! 🙂 In all seriousness though, they are both so different, but I think we both enjoy aspects of both.

Q: And finally what’s the one thing you would like readers to take away from ‘Capitol Hell’ ?

Alicia: As much as we poke fun and satire life on the Hill as a Congressional staffer, I think we both agree that the experience is one we wouldn’t trade for anything in the world. If you are young and have a mind towards public service, pick up, move to DC, and work on the Hill. There is nothing in the world like it. Just make sure you bring your best flats, plenty of energy, and keep your wits about you!

Buy the book on Amazon: Here

For more info on the authors and the book visit: http://www.capitolhellbook.com/

I hope you enjoyed that, I certainly did – keep your eyes open for more interviews with fascinating, talented people in future posts.